I hold an appointment at the University of Michigan as an assistant professor of anthropology and as a post-doctoral fellow in the Michigan Society of Fellows.  I research the social and reproductive behavior and social structure of chimpanzees, taking advantage of the unparalleled long-term study of the chimpanzees of Gombe National Park, Tanzania, which is now in its 58th year.

Following my work showing evidence of effective male sexual coercion in the Gombe population, I am now investigating alternative male reproductive tactics and the influence of demography on the efficacy of different sexually-selected reproductive tactics.  I am also pursuing a project on the predictors and adaptive value of male relationships in chimpanzees, using recently-developed network-based methods to analyze long-term data and data collected during my field work.

Finally, following recently-published work using social network analysis to investigate the nature and catalysts of a unique community fission in Gombe from the 1970s, I have begun a project investigating the predictors of community structure in two communities of east African chimpanzees, one in Gombe and one in Uganda.  I plan to extend these efforts by using the network structure of groups to investigate the costs and benefits of group living, with a view to making broader comparisons among non-human primate and human groups. 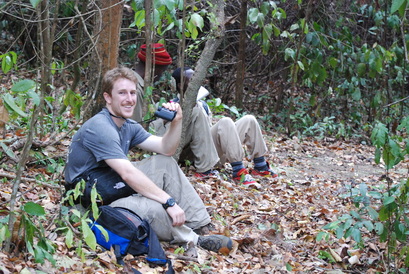